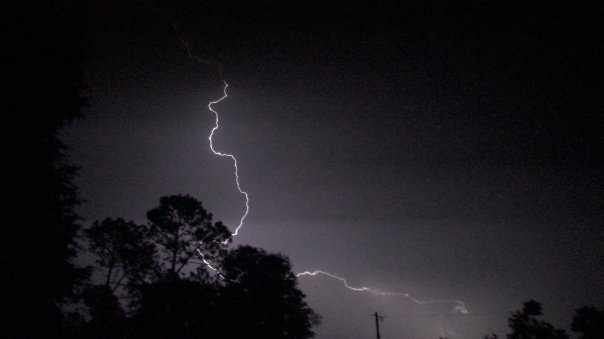 The western sky gives up it’s last shades of summer evening light as twilight steals across the land covering the earth with darkness. A sliver of a moon appears for a short time, then disappears as storm clouds began to form in the northern sky.

Thunder begins to rumble and lightening streaks illuminate the night sky. In place of the gentle breeze that was barely rustling the leaves, there is now a strong wind blowing dust and trash across the land.

Within minutes, the thunder intensifies, the lightening streaks become more frequent and the wind continues to rise and within seconds the Storm is upon us in all its fury, raindrops pelting against the windows, and the wind causing the house to shake ever so slightly.

As I stand by the window and watch the above scene unfold, I know that if I were to dare venture outside, I would be soaked within moments of being in the elements of this storm. Suddenly, something catches my eye in the branches of the tree right next to the window. Somehow amidst the branches that are being blown to and fro violently, in the storms fury, I catch a glimpse of a bird’s nest with something in it.

Within moments the rain and wind slowed ever so slightly and I was able to see a mama bird peacefully sitting on her nest, faithfully keeping her young ones safe, no fear of the Storm.

So my friends, what could this mean for us individually? My mind is drawn to Psalm 91 and how the writer of that particular psalm may have possibly been facing tremendous storms that could have taken his life, yet he knew that in abiding in the presence of Jesus, there is safety, no matter the winds and rain.

“He shall cover you with His feathers, And under His wings you shall take refuge; His truth shall be your shield and buckler” -Psalms 91:4

So as that mama bird upon her nest, peacefully waiting out the Storm, her nest obviously was well made and fastened properly to that branch. What is our foundation? Is it in the Father, knowing that no matter what the Storm, you are safe in His presence?

“You will keep him in perfect peace, Whose mind is stayed on You, Because he trusts in You”
-Isaiah 26:3 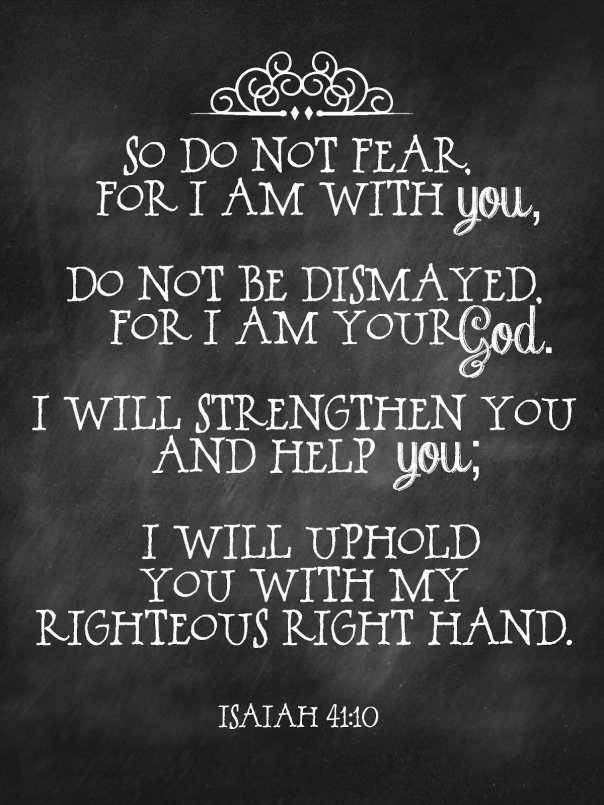 •Fear• an unpleasant emotion caused by belief that someone or something is dangerous, be afraid of, painful, threatening

My friend, have you ever been so afraid, so scared that you literally trembled in your shoes? Maybe it was something the Father was asking you to do, and you were positive you could not do it, and the Spirit of fear took over, because it was just too scary and out of the box for you.

My brother, my sister, let me remind you of something:You Are Not Alone! Just listen to the words in Isaiah:

“So do not fear, for I am with you; do not be dismayed, for I am your God. I will strengthen you and help you; I will uphold you with my righteous right hand.” ~Isaiah 41:10

Now let the words penetrate your heart, soul and spirit, allow them to take root in your heart!

Did you know Fear is actually, False Evidence Appearing Real? See, it even spells fear! And here’s something else to consider, when something is false, that means it’s not true!

Is it any wonder that the phrase, Fear Not, appears in the Bible 365 times? A new promise for Every Day of the Year! I believe that the FATHER knew that fear was going to be a struggle for all of us, and if we are honest with ourselves, we will admit that we struggle with fear. Yes, I know that’s not an easy thing to do, but when you admit something, you recognize that there is a problem and there is tremendous freedom in that.

So in this very moment, Where ever you are, whatever you are facing! REMEMEBER! The FATHER is on your side and He is saying, “My Child, I am with You! You are Not Alone!”

Even now, as I am writing this, I am reminding my own heart to not be Afraid, but to take the Father’s hand, and allow Him to lead me, because the Father has asked me to do some things that are scary and my heart wants to be fearful, but I will not walk in fear, but in freedom! My spirit is encouraged by the words in Isaiah,

“Behold, I am doing a new thing; now it springs forth, do you not perceive it? I will make a way in the wilderness and rivers in the desert.” ~Isaiah 43:19

Finally, my friends, Rejoice! Rejoice in the fact that you are not alone and that we serve a God who is mightier then any mountain you may face! He loves you unconditionally and your Name is written in the palm of His hand🖐❤

Rest in His Arms, allow Him to hold you, still your heart and feel His Love❤

There was once a young girl, scarcely more then a child, who loved to play in water puddles, her favorite thing to do was to step in the water then step out and walk across a dry surface, leaving behind a trail of perfect footprints. 👣👣👣

One day as she stepped out of the water and walked away, looking back at her foot prints she noticed something was different this time, the footprints were no longer perfect, both prints were now crooked and odd shaped.

And just like that, the young lady began to walk with just a slight limp, which then turned into a major limp as several years passed. Those around her began to notice the limp, asking what was wrong and the young lady didn’t know what to say, nothing hurt she just couldn’t help but walk like that. The young lady was almost a teenager, so of course, her appearance was important to her, but with all the questions about her stature and walking, she became super self conscious, blaming herself for not walking correctly and unknown to many people, the young lady was in a very dark and difficult season of her life.

Many trips were made to the doctor’s office, therapy was scheduled orthotics were specially made to help her feet, and from the very first time the young lady saw them, she hated the orthotics, they were so ugly and deformed her shoes. A surgery was scheduled and done, yet the limp was still there.

Several years passed, the dark season continued and another surgery was scheduled, this time a major one. The pain that followed was almost unbearable, but it did help. The biggest change came when a decision was made, a decision that would transform her entire life.

All this time, for 12 plus years she had been wearing orthotics, constantly dealing with lots of pain, barely being able to walk by the end of the day and always so self conscious of herself, especially her feet. She was told she would have to wear orthotics for the rest of her life, but then..

As she came into the light, she began to experience a relationship with the Father, finding freedom and healing as bondages and curses were broken off. She finally understood that the Father loved her unconditionally and that changed her life radically! She began to notice that it no longer bothered her that her feet looked a little different.

One day she decided that she needed new shoes, and she felt the Father telling her, “this pair of shoes I want you to experience something new and different, like you haven’t experienced in over 12 years”

“Behold, I am doing a new thing; now it springs forth, do you not perceive it? I will make a way in the wilderness and rivers in the desert.” ~Isaiah 43:19

She bought the shoes, wore them numerous times and never once used the orthotics in them. Even better, she had/has zero pain in her feet at all, she was healed! Praise God

Brothers and sisters, we serve a Father who can heal and restore EVERYTHING that is broken and hurting within us! Will you trust Him to do it? He want you to be Free!

I am the person in this story and I stand amazed at how the Father continues to bring healing and restoration in our lives. Praise God!