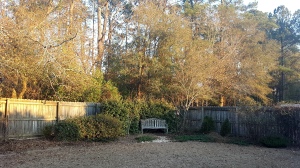 To not be anxious is to cease from worry and letting the cares of the world overwhelm oneself. It’s being at Rest, not because the circumstances are Perfect, but because the Father, the One leading you is perfect in ALL His ways.

How easy it to shift our focus on to ourselves and our circumstances that seem so imperfect and impossible, attempting to take things in our own hands and control situations that are way out of our league. We then acknowledge that step one didn’t work so we attempt step two which is to try and change things which is a sure recipe for disaster.

We acknowledge step one and two don’t work so, we stumble over ourselves and attempt step three which is becoming anxious because we are attempting to do things in our own strength and they just simply don’t work. So now we are anxious and that opens the door for fear to also come in because we don’t know what else to do.

My friend, things cannot be done in our own strength, it’s literally impossible! We simply cannot control things, it too is impossible. We must return to the Way of the Lord, falling upon our faces and acknowledge our sin of doing things our way! We must Surrender! Laying all our Hopes, dreams and desires on the altar before our King and allowing Him to have His way in us and saying as Job did:

My friends, anxiety is not a part of God’s plan! It’s simply a tactic the enemy uses to attempt to get our focus off of our Heavenly Father! Let us look at two specific verses that are written in the Word of God that address anxiety and fear.

“For God has not given us a spirit of fear, but of power and of love and of a sound mind.” ~II Timothy‬ ‭1:7‬

“Be anxious for nothing, but in everything by prayer and supplication, with thanksgiving, let your requests be made known to God; and the peace of God, which surpasses all understanding, will guard your hearts and minds through Christ Jesus.” ~Philippians‬ ‭4:6-7

Let’s take Note of the pattern we see in the last scripture after He commands us not to be anxious. “but in everything by prayer and supplication, with thanksgiving, let your requests be made known to God”

It is with a heart of gratitude that we are to come before Abba Father with our requests, we also acknowledge that at times it is much easier to be thankful then others. There is always some thing to be thankful for in every situation and it is so important to have a heart of gratitude at all times. Try it, I promise you it will shift your focus❤️

So now we know that it is with a heart of gratitude/thanksgiving that we are to make our requests known to the Father. Just listen to the promises following those first words: “and the peace of God, which surpasses all understanding, will guard your hearts and minds through Christ Jesus.”

Just let those words speak to your heart, meditate on them and allow the Peace of God to flood over you as you choose to surrender it All to Him🙌🏽

How completely satisfying to turn from our limitations to a God who has none.

The woman coming to the well to draw water, seeking to fulfill a physical need, meets the One who fulfills a deep spiritual need within her and gives her Living Water.

My heart is continually stirred as I ponder this story and as I have read and reread the passage recording this beautiful story of redemption. Such a beautiful story unfolds as the woman, who’s name we do not know, comes to the well and meets her Messiah. Let’s meditate on the well for a moment and why Jesus may have chosen that spot to sit and rest.

It’s quite obvious that Jesus had traveled quite some distance and the fact that He chose to sit and rest at a well is really of no surprise. Let’s think of a well as a place of rest, a place where one can be refreshed by the cool water that is drawn from the well.

“Now Jacob’s well was there. Jesus therefore, being wearied from His journey, sat thus by the well. It was about the sixth hour” ~John‬ ‭4:6‬

The Samaritan woman coming to draw water was seeking to fulfill one or more physical needs, one of those being thirst and another being to draw water perhaps for washing for her household. Imagine her surprise as she draws near to the well and sees a man and a Jewish man at that, sitting by the very well she was coming to draw from. At the hour that she was coming, typically there was no one else even close to the well; therefore, that would explain why she chose that time to come and draw water at the well.

A woman of Samaria came to draw water. Jesus said to her, “Give Me a drink.” Then the woman of Samaria said to Him, “How is it that You, being a Jew, ask a drink from me, a Samaritan woman?” For Jews have no dealings with Samaritans.” ~John‬ ‭4:7, 9‬ ‭

Why would Jesus ask the woman for a drink? In those days, the Jews had no dealings of any kind with the Samaritans but Jesus did not let the rules and traditions of those days stop Him from speaking to the woman.

And as we read further into the story we see how Jesus showed genuine Love and compassion for this woman. He spoke truth in loving tones, his heart filled with compassion for her, He showed such loving Kindness to her. Her physical need was forgotten but her spiritual needs that were unknown to her beforehand were taken care of as she listened to the words of Jesus.

It’s obvious her life was forever changed as we read a bit later in the chapter. The Love of Jesus always changes a person and they are never the same.

“The woman then left her waterpot, went her way into the city, and said to the men, “Come, see a Man who told me all things that I ever did. Could this be the Christ?” Then they went out of the city and came to Him.” ~John‬ ‭4:28-30‬

My brothers and sisters, are we receiving and accepting the Love Of the Father. Oh how He loves each of us so abundantly! He calls us His children, that alone should cause a spirit of thankfulness to rise up with in each of us. Our lives should reflect an unending lifestyle of worship, praise and adoration for our Heavenly Father🙌🏽

“Behold what manner of love the Father has bestowed on us, that we should be called children of God!” ~1 John‬ ‭3:1

As for myself, I have found my perfect pattern in Jesus, who said, “The Father has not left Me alone, for I always do those things that please Him.” I am no longer motivated by personal ambition. I have discovered a sweeter, purer motive: simply to please my Father. ~Derek Prince